A Carefrontation with Feminist Space | Part I: EVBG & CRYBABY

The gender issue in art doesn’t only start with the body representation of the female in art and finishes in the number of artists represented in museums, galleries and art festivals. It goes deeper than that, it’s institutional. There aren’t more female artists represented in those spaces because who makes those opportunities happen are also mainly men. And because their works aren’t shown, the only time we get to encounter women in art is to see them depicted in the works of male artists, their role there, normally, is one of beauty and not of genius.

It’s a common misunderstanding to see women’s roles as “still” a powerful one, even if in the background. There is no such thing as women’s roles (or even men’s roles for that matter) and when I mean power, I mean the power to change things, the power to do it differently, the power to deconstruct our imaginary of roles, stereotypes and categorising people, no matter what gender or background. Artists can have that power. They can take us anywhere, make us feel anything. So, why not expect that art can also help us build spaces free of discrimination. This is where Project Spaces come in. Those independent spaces are more likely to be free of pre-established concepts. By being spaces of collaboration, they are also an open book for art, without attachments, or having to compromise for the sake of money and business.

Berlin’s art market is no different. Only a month ago, Berlin Gallery Weekend managed to stay white and male, perpetuating the old fashion standards of marginalisation [1]. Recent events have shown the importance of project spaces that promote variety, spaces that still manage to challenge themselves and to bring us new, fresh approaches while reaching out to other projects, building a network of support and community.

To get a better sense of how project spaces can affect this institutionalised problem, I decided to take a closer look on five  participants of this years’ Project Space Festival Berlin – hoping their insights may help us to move forward:

You describe your work as concerning some concepts of contemporary life. How do you address them with your project, especially feminism?

Marie Sophie Beckmann and Julie Gaspard: “Investigations into contemporary life” can mean an exploration of meme culture, a reflection on body representation or taking hashtags too seriously. Intersectional Feminism is a concept we both identify with, but at the same time we need to think about what this means today, now that Feminism is such a trendy buzzword. We were earmarked as feminist curators after our second show. But, if all it takes to be considered ‘a feminist curator’ is showing mainly female (identifying) artists then the bar is very, very low. We are happy if and when people identify with the feminist tone in our events, as our understanding of the concept does influence how we work, with whom we work and what topics interest us.

It’s impossible not to notice the ironic and fun tone of EVBG, do you think that humour or irony are useful tools to reach a public more easily?

We don’t consider our work ironic, we are always genuinely excited about what we do and who we work with. Being humorous and having fun with a subject or installation is part of that, especially in the way we frame our exhibitions and events. For instance, when writing texts we try not to follow the very common, often rather hollow 'art speak’, but to use a more associative and accessible language. We also often work with artists who use humour as strategy in their work to tackle difficult topics such as gender and sexuality.

Opposing discrimination is on all of us, what do you think we could be doing more to change the current panorama, especially in the cultural and art world?

As white cultural practitioners we should be aware of our white privilege and our narrow view on the world. Keeping each other accountable, checking in, reading and adjusting the way we speak about concepts and the artists we work with is an ongoing process for us.

What can we expect from EVBG at Project Space Festival Berlin 2019?

We are happy to be working together with the very cool, very lovely Finnish artist Anni Puolakka. On June 12th, we will present three of her recent video works that revolve around notions of care and nourishment. Anni will also stage her performance Suckling Animal Sibling and spill litres of oat milk. Not to be missed. 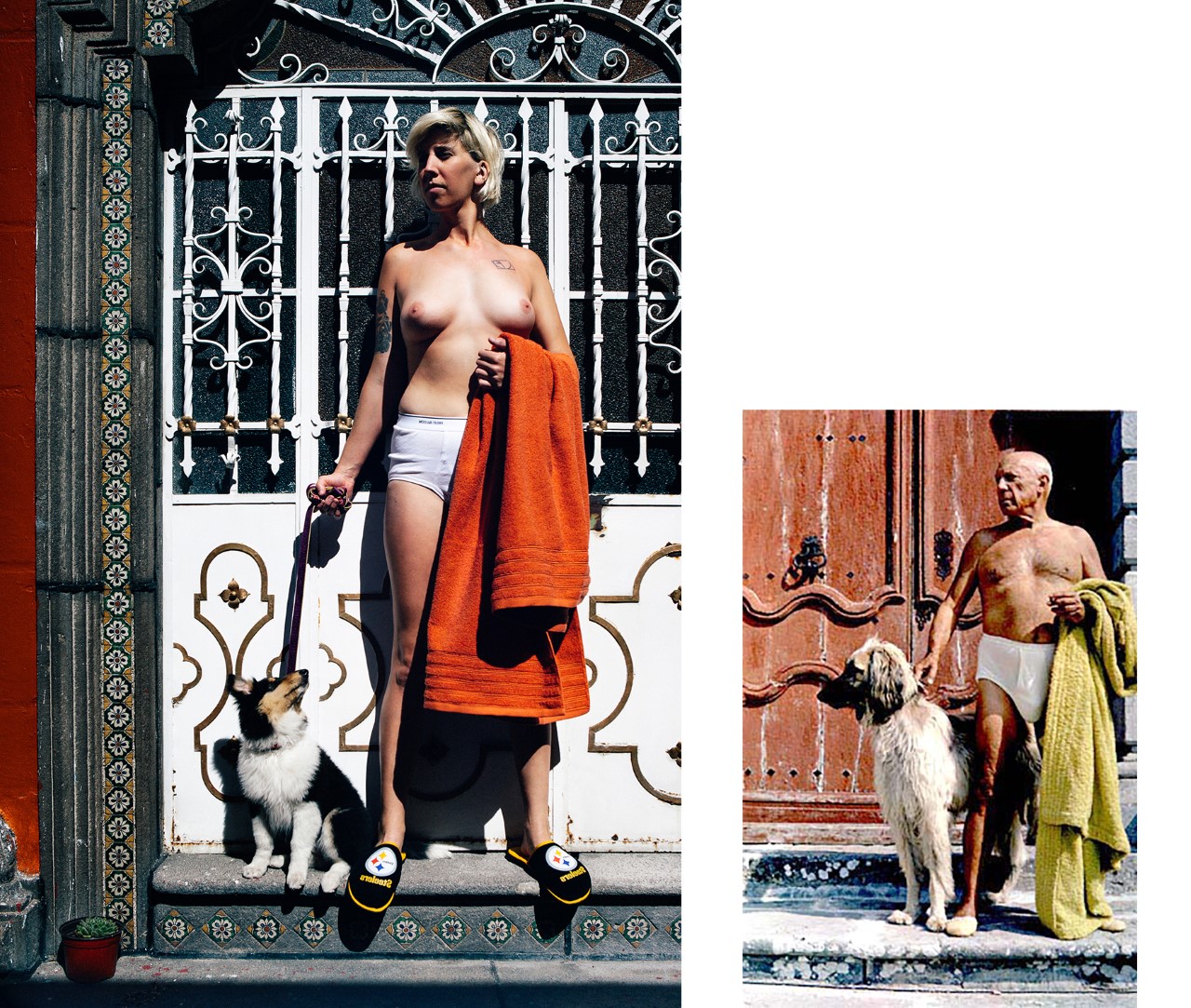 Crybaby is run by two female artists. Are there any feminist approaches in your project?

Annelies Kamen: *Just to clarify, Crybaby was founded by Samantha Bohatsch and myself, but we are not the static directorial team – it changes and can change with each exhibition / event / etc.

Definitely, being a feminist is an integral part of my identity and artistic practice – it influences all of what I consider ‘best practices’, not just for how I participate in Crybaby, but how I conduct my own research and contextualise my own work. With Crybaby being such a brand-new endeavour, my priority is that it functions within a practical/pragmatic feminist philosophy. What I mean by that is that Crybaby should first provide tangible benefits to the artists we work with – we pay our artists, we work to provide them with further exhibition opportunities within our networks, we don’t exploit artists for the goals of the curatorial project.

Working in the art context in Berlin, is there still a lot to change? Where could we start?

There is still a lot to change, and a lot of work to do, because many of the structures influencing the art scene in Berlin are changing for the worse, just as quickly as we can fight to correct them. The urgent problem of rising rents and scarcity of affordable studio spaces is threatening the future existence of an independent art scene in Berlin. This is an intersectional feminist issue that will disproportionately negatively affect female artists, who already struggle more to earn a living from their work (see the 2018 IFSE Studio Berlin III study). We need to continue to advocate, march, lobby, vote and divest to change Berlin’s state policies to support the cultural production that the city government claims to value, as well as demonstrating our values within the art scene by showing art, hiring people  and paying fair wages in the organisations we found, run and support.

Working with different collaborators, coming from different backgrounds or working in different locations, do you think that feminism faces the same issues everywhere?

Well, it’s not as if I have an incredibly varied, global point of view on the issue. Crybaby, and my own practice, is mostly active in Europe and North America. However, the point of intersection of feminism and labour rights is where action is desperately needed in many art contexts. This is true of the exploitation of adjunct college faculty at art schools in the United States, the prevalence of sexual harassment within Berlin’s art scene, as well as the abysmal gender pay gaps that still exist in the art world as a whole.

What can we expect from CRYBABY at Project Space Festival Berlin 2019?

Crybaby will be presenting a new performance by Kelly Lloyd. Kelly, who is currently based in London, is collaborating with two Berlin-based artists, Elizabeth Ravn and Annelie Andre, to develop a mobile performance that looks sideways at art’s position on the hierarchy of needs.

Shooting of CRUSTACEAN TEMPTATION by Rebecca Goyette, 2017. Courtesy of EVBG.

Text by Gabriela Frade, born in 1990 in Lisbon. Studied History (Lisbon and Barcelona) and Arts Management and Museology (Lisbon). Has been living and working here and there. Cares for people and culture, in that order.